Breakout from the Meuse 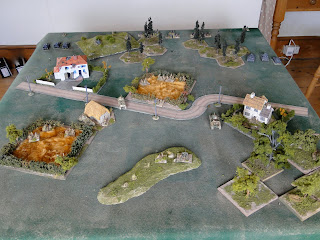 This is my second game using Blitzkrieg Commander II. The scenario is set in May 1940, as there are not too many support units it is ideal for new players of the rules system.

The mission for the Germans was to destroy the French armour or force them from the field. 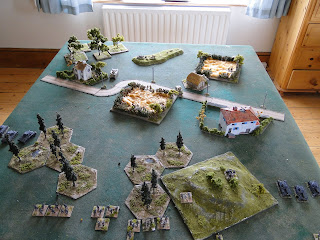 Move 1: Seen from the German side.
The German plan was to push the infantry through the centre, while the Panzer Companies race down the flanks. 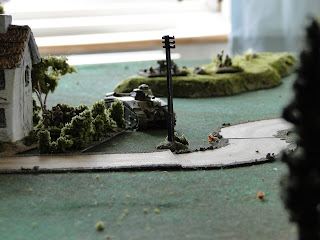 The Char B guarding the French right used its opportunity fire but failed to hit. The young veterans of the panzers wasted no time and opened up with all guns blazing, scoring enough hits to destroy the French tank. Move one and the toughest tank already knocked out! This was going to be too easy.

The French turn was pretty uneventful, they were still in shock from the loss of the Char B.
Move 2: Saw the German panzers push further on, the Panzer II Company on reaching the road were engaged by one of the Somua S35s, bad marksmanship meant it failed to score a hit ! The French weren't having any luck here. The Pz II succeeded with a third command roll and replied suppressing the Somua. 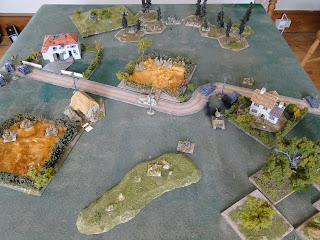 The French HQ despatched the other Somua to their right flank to cover for the lost Char B. This ended the move. 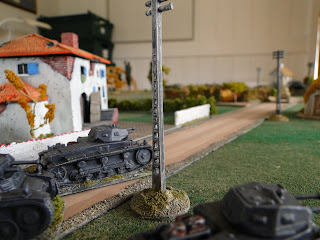 Move 3: Disaster, the Pz IIs about to finish off the Somua fail a command roll. To make up for this the infantry company have four successive command rolls they line the woods ready to advance on the central wheat field. 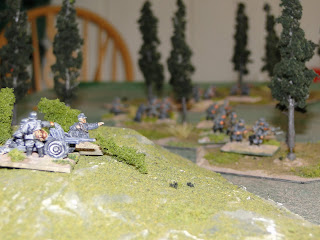 Move 4: The French finally have some good fortune, one Somua takes out a Pz III on their right and the other kills two Pz IIs on the left flank.
Move 5 and 6: The Germans regain their composure and redouble their efforts. The last PzIII kills one of the Somua S35s and the infantry advance on the wheat field engaging the French infantry.
Move 7: Germans falter, the infantry company have a command blunder and the CO fails his command roll, rolling 11. The French however fail to capitalise on the German inactivity, by failing their command rolls.
Move 8: The German infantry win the firefight with the French infantry, suppressing three of the four defenders. (dead markers show suppressed units in the picture below). 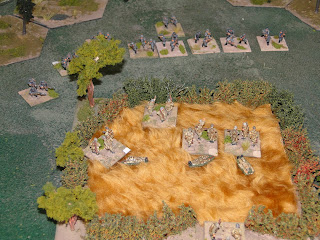 They waste no time in close assaulting the French. 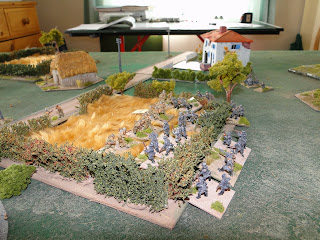 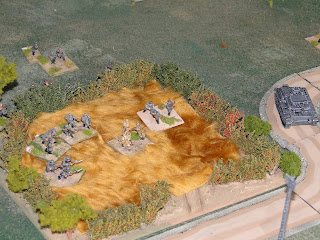 A German tactical win but not a decisive one, as they didn't fulfil their objective.
You may have noticed the failure of the German Artillery, I forgot to move the FAO, lesson learnt.

This was a solo game, taking a couple of hours on Saturday afternoon and very enjoyable too. 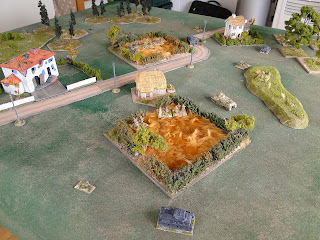 The game was loosely based on the Flavion - Breakout from the Meuse scenario in the Skirmish Campaigns book, France 40 - the Ghost Division. As I don't have any painted Pz 38ts I used PzIIIs instead. The books are great for scenario ideas. As written, the actions are scaled down and aimed at the skirmish level. However they are easily scaled up to company or battalion level.
Posted by Anthony Hobbs at 12:29